BYU gained an advantage over a struggling Hawaii team as freshman quarterback Taysom Hill and freshman running back Jamaal Williams rushed for over 100 yards each to lead BYU to a dominating home win, 47-0.

Making his first start of the season in place of injured quarterback Riley Nelson, Hill led the Cougars to their most convincing victory of the season by rushing for 143 yards and one touchdown. Hill got a chance to show off his speed as he broke the game open near the end of the first half with a 68 yard touchdown run to make the score 20-0. Hill also passed for 112 yards and threw touchdowns to Ross Apo and Devin Mahina.

“I’m happy with the way we played,” Hill said. “We made plays and some mistakes. I’m still happy overall. I think this is the first time we have scored on the first drive, so that is a great thing.” 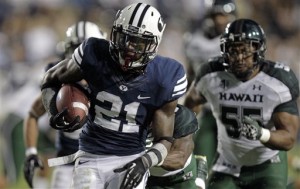 [/media-credit]Williams had 155 yards rushing and two touchdowns after Michael Alisa went down early in the first quarter with a fractured right arm. Williams, who is only 17 years of age, impressed Head Coach Bronco Mendenhall with his play.

“Jamaal has great vision,” Mendenhall said. “He is a great athlete and we have seen all of that in practice.

He made the most of his time. Now we will get to see how he handles it against tougher and stiffer competition.”

This was the first time BYU had multiple runners rush for over 100 yards since  Curtis Brown and Mike Hague both rushed for over 100 yards against UNLV in 2006. The Cougars 396 rushing yards were the most under Head Coach Bronco Mendenhall since his arrival at BYU. It was 69 yards shy of the school record for rushing yards in a single game of 465 yards, an amazing accomplishment consider the team had not had a 100 yard rusher since Josh Quezada broke 100 yards in 2010.

BYU’s defense continued it’s dominating play, allowing only 149 total yards and 41 rushing yards. The Cougars pressured Hawaii quarterback Sean Schroeder all night and came away with three sacks, two of those coming from junior linebacker Kyle Van Noy. The Cougars, who had struggled in the last two games to force turnovers, had three turnovers to set the offense up in good field position.

“Turnovers are something we always focus on, and we need to get more of them,” senior defensive end Ezekiel Ansah said. “All we need is a plus one or more. We keep practicing them in practice. They say that practice makes perfect, so that’s what we’re doing.”

Hawaii lost defensive lineman Geordon Hanohano and Siasau Matagiese early in the first quarter when both sustained neck injuries a couple plays apart. Both players were carted off the field and taken to the hospital for treatment. Coach Mendenhall also announced that junior tight end Austin Holt will redshirt the remainder of the year as he has been unable to come back from the knee injury he sustained last season.

BYU has now won nine of the last 10 meetings against Hawaii and will look to continue their improved offensive play in one week against Utah State.

No. 7 BYU women’s volleyball’s season ends in sweep against No. 2 Pitt