In 1991, a poster changed the life BYU alumnus Jonathan Crampton.

“I was in a dorm room in Heritage Halls when I saw this poster of a student finishing the St. George Marathon,” Crampton said. “I looked at it, and I said to myself, ‘That’s what I want to do.'”

It wasn’t easy, but Crampton accomplished his goal and finished the race.

“I finished the race in three hours and 53 minutes, and I was white as a ghost coming over the line. Kori, my wife, looked at me and said, ‘You look absolutely horrible.’ So I decided I would never run another marathon.”

But Crampton was hooked. A year later he was pursing a graduate degree in Texas when he saw another sign for a marathon.

“I hadn’t thought too much about marathon running after my first race until I saw this sign in downtown Dallas that said, ‘Dallas White Rock Marathon in December.’ It was three weeks away.”

From then on, he began running about one marathon a year until he reached his 50th race at age 45. On Saturday, he finished his 100th race at the Top of Utah Marathon in Logan in three hours and 43 minutes.

There are about 600 runners nationwide who have completed 100 marathons, and only about 15 living in Utah, according to Crampton, now a 51-year-old husband and father with three daughters.

During the Top of Utah Marathon, he was able to have the number 100, symbolizing how far he has come. Not only has he passed the 100-marathon threshold, but he was able to do it faster than the first time.

“I feel fantastic,” Crampton said after finishing the race. “It was fun to have my family, friends I have met over the years, and other pacers there for this great experience.”

Crampton began running as a 16-year-old investigating The Church of Jesus Christ of Latter-day Saints in his home country of England. Someone in his branch simply told him he looked like a runner.

“I competed in the Newcastle athletics meet, where I won four of five events that the branch president entered me in. Once I realized I had some talent, I began training,” Crampton said.

Crampton was baptized two years later at age 18. He served a mission to Brussels, Belgium, and decided to study physical therapy at BYU, where he saw the sign for the St. George Marathon.

Although he is far away from his hometown in England, Crampton receives a lot of support from his family. They have seen many of his meets here in the United States.

“The first time we really knew he was going for 100 marathons was when he ran his 60th,” said Crampton’s older sister, Julie Lazonby. “That meet was the first time we had ever seen him run a marathon race.” 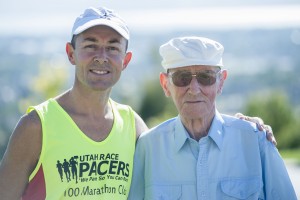 “I feel very proud,” Philip said. “It’s quite a goal to complete what he set out to do many years ago, and after pushing himself, he made it.”

Crampton counts his father as the inspiration behind the 100-marathon goal. He wanted to be able to complete 100 marathons while his father was still alive. During the race, his father, sister and brother-in-law sat on the sidelines cheering him on. Philip, who is still in great health, hopes to see future races.

“If he runs 150 marathons I will try and stay here on earth to see them,” Philip  jokingly said.

Crampton will only have a few weeks to celebrate as he prepares himself for the St. George Marathon on Oct. 6 and the New York Marathon on Nov. 4.