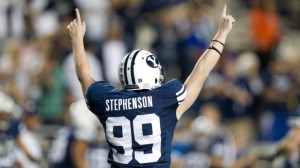 Stephenson earned his spot as player of the week after punting six times for a 47-yard average against Boise State. This is quite a feat, considering Boise’s notoriously rowdy crowd.

Stephenson said about the Boise State game, “That game, I was kind of nervous at the beginning. Came into the locker room just before we were to go out and play and I just kind of sat for 5 minutes just not thinking about anything; just trying to clear my mind. Came out and I was relaxed and ready to go.”

Bronco Mendenhall, BYU Head Football Coach, took note of Stephenson’s game, “Last week in particular, his punting was key in us having a chance right to the end of the game. Changed field positions multiple times and really been punting well I’ve been very impressed.”

This is Stephenson’s third time earning Independent Player of the Week this month alone. He also received Honorable Mention Punter of the Week for the second time this month. Stephenson punts an average 47.3 yards per punt, which ranks him 5th in the Football Bowl Subdivision and gives his team a good chance to score.

Although some people in the spotlight let it go to their heads, Stephenson is still aware that football is a team sport and he works hard to help his team out.

“What means a lot to me is that we get our team a good field position, because when that happens our team dominates…This year it’s been really good for me…I’ve stayed pretty consistent and it’s reflected in the games,” said Stephenson.