BYU football isn’t what it used to be. The Cougar football program has grown and developed over the past 80 years to winning a national championship and having some of the nicest facilities in the country. Originally, the team played games in front of a much smaller crowd where the Richards Building now stands.

Although students use the never-ending stairs between the Tanner Building and the southwest end of campus to get to and from their classes each day, that was not their original purpose. The stairs used to be the stands of the old hillside stadium, which was home to the BYU football team in the 1930s.

The permanent stands at the old stadium seated 5,000 people, with temporary bleachers on the west side accommodating up to 12,000 people. This, however, is a small number of people compared to the current capabilities of the LaVell Edwards Stadium, which seats up to 65,000 people.

The old stadium was first used in 1928, when BYU football Coach Ott Romney led the Cougars to their first victory against the College of Idaho Coyotes.

“From its humble beginnings, it’s pretty awesome what BYU football has become,” Mel Olsen, previous offensive center and offensive line coach for BYU football, said. “It’s kind of unheard of to go from a place like that old stadium to winning a national championship.” 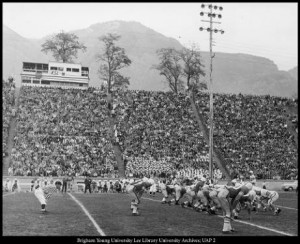 [/media-credit]The LaVell Edwards Stadium, the current home to the Cougars, has not been the only innovation to the BYU football program over the years. Since 1964, BYU has added the indoor practice facility as well as the Student Athlete Building, which is equipped with academic advisement for the athletes, a physical therapy center, the football gallery, the exclusive football locker room and many other services.

Olsen recalled that before and during Edwards’ coaching of the BYU Cougars, the team had to use the west annex of the Smith Fieldhouse for practice whenever it rained or snowed because the indoor practice facility was not built yet.

“The area was so small that the offense would practice for an hour and a half, followed by defense,” Olsen said.

After LaVell’s run, BYU football continued to progress to become the team it is now. The team is now equipped with Nike uniforms and state-of-the-art facilities.

“I think that BYU’s football facilities are among the nicest in the country,” wide receiver Cody Hoffman said. “Not too many stadiums still have natural grass fields … it takes a lot of work to care for a grass field.”

Whether it’s accompanying thousands of fans on a Saturday night or providing an excellent environment for the football team, the LaVell Edwards Stadium is home of BYU football and the result of a rich history.

“The improvements and successes of the football team (are) largely due to new facilities, skilled coaching and commitment to and pride in the team,” Olsen said. “It was all pretty exciting to watch unfold.”