Hundreds waited in line for the new release of the iPhone 5. One man camped out for 30 hours, and was the first to leave the apple store with the coveted new gadget. He was part of the viral iPhone 5 video created by two BYU students which featured the iPhone being shot at by a handgun.

Eric Thayne and Nate McMaster produced the viral video campaign which launched on Sep. 23,  for a local company, ClearPlex. The company creates clear protection films for iPhones. ClearPlex is seeing record sales as a result of the video campaign.

The youtube video shows a man shooting a handgun at an unprotected iPhone 5, and the screen cracks. Then the video displays an iPhone with a ClearPlex protector on the screen and the man proceeds to shoot at the protected iPhone 5. After the shot, the iPhone appears to have no damage.

Thayne, a graphic design major, shot the footage as well as created the background music for the video. Thayne also directs the graphic design and web development for the company, and was asked by ClearPlex to create a video to draw in more customers.

“The company,  produces clear plastic films for windshields,” Thayne said. “They created the idea to launch this video as the iPhone 5 is being released. ” 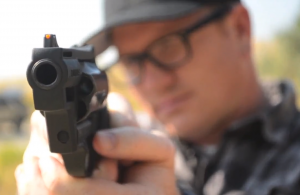 Thayne and McNaster proceeded to brainstorm ideas for shots and also considered what equipment should be used in producing the video.

“Shooting the video was really interesting, because we were using brand new equipment,” Thayne said. “It took a pretty big budget to make the video.”

Nate McNaster, a chemistry major, was fairly unfamiliar with the ClearPlex protector and was worried that it wouldn’t protect the new and highly valued iPhone 5.

“To be honest, I wasn’t sure that the protector would work,” McNaster said. “So we were surprised at how well it protected the iPhone.”

McNaster and Thayne also had to use back up iPhones to shoot with the handgun in order to perfect the shot.

“We had one shot to take with the camera so we had to get it right,” Thayne said. “We had some broken iPhones that we used to test out the handgun, so we could get the shot that we wanted.”

Thayne credits BYU in helping him with the video. The courses that Thayne took helped him to achieve success in his work.

“I took a class on youtube marketing at BYU, and it’s helped me a lot,” Thayne said. “Last week my youtube channel hit 100 thousand views.”

The video, that has reached 112,000 views in a week, can be viewed on youtube and is titled: “iPhone 5 survives being shot with handgun – ClearPlex”.