Going on a date, buying groceries or picking up a relative from the airport can seem ordinary and simple. But without a car, these activities become more complicated.

Whether or not the weather is sunny or snowy, students without cars have to walk everywhere. Those students find creative ways to live, work and enjoy their lives.

Jason Redford, a senior graphic design major from Rancho Cucamonga, Calif., did not own a car for his first year of marriage.

“Mainly, we just didn’t have the money to get one,” Redford said. “We are very independent, so we couldn’t ask for any money from our parents and had to support ourselves. We also didn’t want to buy a car and worry about monthly payments.”

He and his wife went on many creative dates. 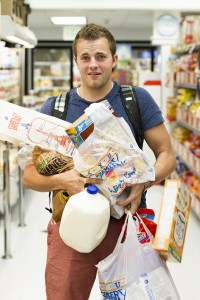 [/media-credit]“When we were dating, we cooked together, did stuff on campus, walked around places and raced boats at the park,” he said. “When we got married, we spent a lot of time going to Center Street. We went out to look at the  antique shop there. We frequently go out for a walk at the park, go out to run, Redbox a movie and get frozen yogurt.”

Redford said he still walks frequently and does not use the car often.

“I think the car makes our life a lot easier, and our life has been more supplemented with a car,” he said. “We treat it as a tool, not a lifestyle. We try to fill up the gas once a month.”

Christin Watkins, a sophomore family consumer science and education major from Malad City, Idaho, gets rides with her friends to go places.

“I get rides with friends to the grocery store, or when I can’t find a ride, I just walk there,” Watkins said. “I usually do stuff with other people, so I can carpool to other places. If I can’t carpool, I usually don’t go. I hate asking people for a ride if they are not going anywhere that I want to go, but I don’t feel bad asking if they are going to the same place as I do anyway.”

Since Watkins doesn’t have a car, she looked for a job on campus.

“It’s been nice to work on campus,” Watkins said. “Classes are so close, so I can go back and forth all the time.”

David Castellanos, a junior from Atlantic City, N.J., majoring in biology, said he would love to have a car but cannot afford one.

“It’s bad enough to pay for tuition and rent and on top of that, if I have a car payment, that would be a huge hassle.”

Despite the lack of transportation, he still takes girls on dates.

“I had some trouble about it previously, so I make sure to have a car to borrow,” Castellanos said. “Honestly, it’s hard to ask a girl out without a car; I just feel dependent. I have to ask my friends in order to go on a date. If my friends can’t let me borrow their car, I can’t go anywhere.”