The Obama Administration’s controversial Affordable Care Act (ACA) is getting under way in California, and with it might come a reality TV show.

The California Health Benefit Exchange (the committee responsible for overseeing the adoption of the ACA in California) has recently hired communications giant Ogilvy Public Relations Worldwide to bolster more support and understanding for the new health care law. The exchange hopes to get people onto the ACA website and get the millions of uninsured Californians shopping for health insurance. Part of Ogilvy’s strategy is to tap into the Hollywood crowd, an industry with plenty of Obama supporters.

The plan is to have prime-time network shows like “Modern Family” and “Grey’s Anatomy,” as well as telenovelas on Univision, incorporate the health care law into their story lines. But beyond just having other shows base plots on the health care law, Ogilvy says that they also plan to pitch a reality TV show that offers an inside look at “the trials and tribulations of families living without medical coverage.” 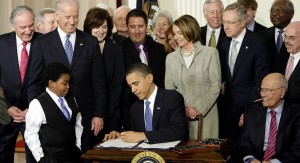 Richard Davis, a political science professor at BYU, isn’t so sure.

“No, I don’t think it will affect people one way or the other,” Davis said in an email. “People don’t need to watch a reality show to understand the problems with health care insurance, access and delivery. They live it.”

Spencer Adkins, a geography student from Tulare, Calif., disagreed with Davis and said he thinks it could be an effective part of the campaign.

“I actually do think it will be,” Adkins said. “I think people respond well to technology, especially in our world.”

But it’s unknown if  a creative way to advertise is enough to change people’s minds.

“People really look up to actors,” Adkins said. “When people see something like that on a large scale, on these shows, it becomes more socially acceptable. It’s the influence that Obama has in Hollywood — it’s a smart tactic, but it sucks if you don’t agree with it.”

Byron Daynes, also a professor of political science at BYU, isn’t sure if this technique will help sell the ACA either, though he said he’s not surprised this strategy is coming from California.

“I think the president would prefer an approach where people were made aware of the act by medical personnel explaining the benefits to patients,” Daynes said in an email. “But again, it is coming out of California and from public relations people. This seems consistent with the sort of thing PR people do.”

Considering the Hollywood plan could reach the whole country, not just Californians, Wilson feels that there is a larger purpose in Ogilvy’s strategy.

“They’re targeting people to convince them the health care act is a good thing, to be more supportive to the president,” Wilson said.