SALT LAKE CITY (AP) — Republican Mitt Romney said Tuesday that Democratic President Barack Obama believes government should “take from some to give to the others” as he defended telling wealthy donors that half of Americans believe they are “victims” who are entitled to government assistance.

Romney told Fox News during an interview that he views such redistribution as a “foreign concept” and that there is a “great divide” among Americans on the subject. 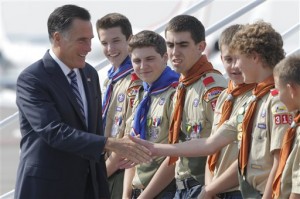 The GOP presidential nominee said a growing federal government, driven in part by people who want support from government programs, has jeopardized the country.

“It’s a pathway that looks more European than American in my view. And it’s a pathway some Americans are drawn to,” Romney said. He said people who pay no income taxes would be unlikely to support his campaign because his plan to cut those taxes across the board wouldn’t help them.

The Republican presidential candidate was reinforcing remarks he made at a $50,000-a-plate fundraiser in Boca Raton, Fla., on May 17, comments secretly videotaped and made public on Monday. Romney’s campaign spent part of Monday trying to mitigate fallout from the video, in which he tells donors that 47 percent of Americans “believe they are victims” and that his job as president wouldn’t be to “worry about those people.”

In response, Romney offered no apologies Monday night during a hastily arranged news conference in which he said the comments were not “elegantly stated” and were spoken “off the cuff.” He said the remarks showed a contrast between Obama’s “government-centered society” and his belief in a “free-market approach.”

Obama’s campaign pounced on the video, which was obtained by Mother Jones magazine and released only hours after Romney’s campaign outlined a new strategy to try to rejuvenate a struggling campaign. The video’s emergence came as advisers to the former Massachusetts governor tried to reassure party leaders and donors about Romney’s strategy amid concerns that the race could be slipping away.

In the video, Romney also said the Palestinians “have no interest” in peace with Israel.

“You hope for some degree of stability, but you recognize that this is going to remain an unsolved problem … and we kick the ball down the field and hope that ultimately, somehow, something will happen and resolve it,” Romney said. He said pushing Israel to give up disputed territory for a two-state solution with the Palestinians “is the worst idea in the world.”

Romney has not addressed his remarks about the Middle East.

Those comments put him in sync with hard liners in the Israeli government, including some aides to Israeli Prime Minister Benjamin Netanyahu and senior Israeli cabinet ministers. Netanyahu himself has publicly advocated for a two-state solution.

The Obama administration favors a two-state solution with Israel and a future Palestine. But it says Palestinian statehood can only come about through a negotiated agreement between the parties, not through the United Nations.

Palestinian lawmaker and scholar Hanan Ashrawi accused Romney of “destroying the chances for peace” and called his remarks “irresponsible and dangerous and both ignorant and prejudiced.”

Romney’s comments in the first video appeared to focus more on the economy, the No. 1 issue for voters in November.

Romney said in the video that his role “is not to worry about those people. I’ll never convince them they should take personal responsibility and care for their lives.”

In a seven-minute news conference with reporters before a fundraiser near Los Angeles, Romney did not dispute the authenticity of the hidden-camera footage. He called for the release of the full video, instead of just the clips posted online. Fuller versions of Romney’s remarks at the May fundraiser were made public Tuesday.

On Monday, he sought to clarify what he said when asked if he was concerned that he may have offended people.

“It’s not elegantly stated, let me put it that way. I was speaking off the cuff in response to a question. And I’m sure I could state it more clearly in a more effective way than I did in a setting like that,” Romney said.

About 46 percent of Americans owed no federal income tax in 2011, although many of them paid other forms of taxes. More than 16 million elderly Americans avoid federal income taxes solely because of tax breaks that apply only to seniors, according to the nonpartisan Tax Policy Center.

The videos were the latest troubles for Romney’s campaign, which has tried to focus attention on a weak economic recovery and make the case that the Republican’s business background would help spur the economy. In recent weeks, the campaign has dealt with the fallout from Clint Eastwood’s rambling conversation with a chair at the Republican convention and Romney’s omission of the war in Afghanistan or thanks to the troops in his prime-time convention speech.

The eruption of violence in Egypt and Libya last week prompted Romney to issue a statement assailing the Obama administration before it was known that an American ambassador and three other U.S. citizens had died in Libya, a move that generated criticism from Democrats and Republicans alike.

A series of polls have shown Obama with an edge nationally and in key battleground states, leading Republicans to implore Romney to give voters more specifics on how he would govern. The new approach aims to improve Romney’s standing in the lead-up to the first presidential debate on Oct. 3.

Obama campaign manager Jim Messina quickly issued a fundraising appeal based on the initial video, telling supporters: “If we don’t come through for President Obama right now, this will be the guy making big decisions that affect us and our families every single day.”

An Obama adviser said the Democratic campaign might use Romney’s comments from the fundraising video in television advertisements. The official wasn’t authorized to discuss campaign strategy publicly and requested anonymity.

Romney’s campaign released a separate television ad Tuesday, arguing that the president’s policies “are making it harder on women.” It cited unemployment and poverty statistics for women in an attempt to close the gender gap that has shown women favoring Obama.