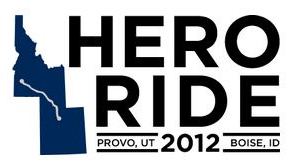 BYU head football coach Bronco Mendenhall and his family have more on their minds than just football this week.

Mendenhall and his family started Thursday’s Heroes six years ago to honor a child or family every Thursday.  Mendenhall and the rest of the BYU football team honor people who are going through a significant challenging time. This year a bike ride was organized to honor all of them.

The Heroes Ride will honor more than 90 heroes and their families. The ride, which started Monday, will go from Provo to Boise, Idaho, and is approximately 460 miles long. Some participants, and even heroes, will ride for a few check points, while others will ride the whole way.

In all, about 86 cyclists will participate. The ride will span over four days and conclude shortly before kickoff for the BYU football game against Boise State on Thursday.

Former BYU player Markell Staffieri organized the ride and is one of those riding the entire distance.

“These kids inspire me,” Staffieri said. “We figured it would be good to honor all of them so far and help raise more awareness about the foundation.”

Staffieri said he is riding for all of those who have been honored because each has such a unique story and accomplished way more than Staffieri thinks he ever could.

Dave Stott, another former BYU player who actually played with Mendenhall, said the program has meant everything to his son, Johnny, who is an honored hero.

“It’s been a miracle,” Stott said.

More than half of Johnny’s body is paralyzed, but his parents said  no matter what the doctors tell him he will not be able to do, he does it — everything from baseball to riding his bike.

Drae Endicott, another hero, has gone through multiple eye and ear surgeries along with other challenges he faces physically and mentally. The past month Endicott went door to door to raise money for this week’s ride. Two weeks ago Mendenhall invited him to come to a team meeting and present the jar of change he collected.

“They all told me I had got a lot,” Endicott said. “They all cheered for me.”

Even though that was a great experience for Endicott, he said  the most memorable thing that has happened to him was when James Lark came to his baptism and since then has become his favorite player.

Cameron Evans, a 10-year-old suffering from muscular degeneration, has been a hero for the past four years, and his mom thinks the program is amazing.

“It’s hard to talk about it without getting emotional,” Kristi Evans said. “It’s our bright, little shiny thing we get to look forward to and work towards every year.”

Current BYU football player Romney Fuga, a senior defensive-linemen, has loved being able to be involved with the program each week.

“I’m always humbled,” Fuga said. “What they go through is so much more intense then anything we have to go through.”

The whole Mendenhall family is participating this week on the ride. Cutter Mendenhall, age 12, said he has learned important lessons from seeing these kids.

“I’ve learned a lot about compassion and gratitude for what we’ve been given,” Cutter said.

For the families involved, they have a hard time expressing their gratitude and have learned there is much more to BYU football than the final score.

More information about the foundation and how to donate can be found here.