Many college students do not have money to spare, so they save their money on everything from eating out to wedding shopping.

Jordan Barber, a senior from Wichita, Kan., studying mechanical engineering, started to use coupons after he got married two years ago.

“We can justify getting something we normally don’t get,” Barber said. “We use coupons the most for eating out. We can have cheap, cost-efficient dates.”

Barber and his wife like using buy-one-get-one free deals for their date nights as well as getting a free meal by repeating purchases. They said they look around the newspaper and Utah Community Credit Union bank to find good deals. 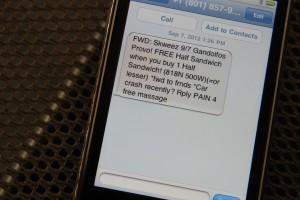 Like Groupon, they localize their coupons to accommodate the needs of students. Groupon, Skweez and XANY offer a day-to-day deal and easy, free sign-up.

“People often purchase more items because they already got the deal through Skweez.”

Students can also purchase a BYU Starving Student Card and save $1,000 on food and entertainment.

Even though he sells the card, he likes using it for himself. 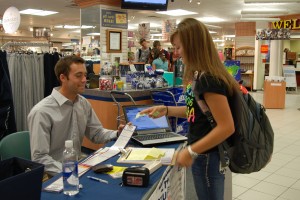 “I use the coupons all the time, especially for my dates. I also got dates by selling this card.”

Whitley Smith, a sophomore from Carthage, N.C., majoring in elementary education, was excited to use her first BYU Starving Student Card.

“I am really excited to use the Studio 1030 deal on this card,” Smith said. “Since I don’t have a car, it’s nice that I can use most of the coupons on campus or within walking distance.”

“When I use coupons, I feel like I scored a great deal,” Neal said. “I am going to get those wedding decorations anyway, but I feel like those coupons are like a treat, a fun bonus.”

Neal said one problem she has is that she forgets to use them before they expire.

“I just forget about using them,” Neal said. “I have the coupons in my wallet, but sometimes they just expire, and I can’t use them anymore. That happens more than using them.”

Mark Davis, a senior from Lawrenceville, Ga., majoring in supply chain, keeps track of the expiration date of the coupons he gets in the mail or newspaper so he knows when he needs to use them by.

He receives coupons through the mail, newspaper and Groupon.

“I don’t really go out of my way to use my coupon,” Davis said. “But when the coupons come in the mail or the newspaper, I make sure to keep them.”