Fred Woods, an author and professor of Church history and doctrine, gave a lecture before the opening of the exhibit explaining the role of Church members during the Civil War.

“The Civil War and Joseph’s prophecy of destruction of the war was quite a sermon that would echo triumphant through Britain and Europe,” Woods said. “There was a large emphasis on moving to Zion, and the Civil War was the loudest sermon.”

Thousands of saints moved from the eastern United States and from Europe during one of America’s darkest times. Many of these emigrants moved across the country in the thick of the war. 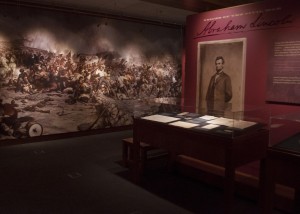 Utah was considered a safe haven from the storm of war. Brigham Young is quoted to have called Utah a “rocky fortress,” where the saints could gather far from the conflict.

Just as the Church is politically neutral today, it took no side in the Civil War. Some Church members supported the North, while others supported the South. The Civil War exhibit showcases letters between families, which show the concern family members had for each other during the war.

Robert Erickson, a political science major from Hollywood, Md., enjoyed reading the old handwritten letters between family members. His ancestors from Denmark and Sweden emigrated to America during Civil War.

“The Civil War had a huge effect on families, and you can see that in these letters,” Erickson said. “No one really talks about the Church members during the war.”

This year marks the sesquicentennial, the 150 anniversary, of the Civil War. Many other museums and universities across the United Sates created displays and exhibits to commemorate those who fought and their families, many of whose records are kept in the L. Tom Perry Special Collections. 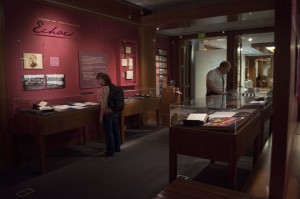 “What amazes me is the artwork from this time period, especially the hand-painted slides; there is so much intricate detail on such a small surface to work with,” Howard said.

Howard designed the exhibit as a way for people to remember both the struggles and the triumphs during the war, shown in the artifacts.

“The takeaway is that the Civil War still matters to us today,” Howard said. “It defines America. I think that’s what BYU students should remember from this exhibit.”