Red shirts flock the cafeteria at the A. Ray Olpin Union Building on the University of Utah campus on Friday afternoon. A table near the entrance displays a sign which says “Bleed red!” and offers a blood drive. A general feeling of excitement can be felt in the air around.

It’s game day. The first of two consecutive weeks of in-state rivalries to take place for the University of Utah football team started Friday. They traveled to play Utah State on Friday evening, Sept. 7, and then are at home against rival BYU on Saturday, Sept. 15.

This game is the last game scheduled to be played at Rice Eccles Stadium between these two schools before the hiatus of the rivalry. Earlier this year, the two teams announced they would not play each other for at least the 2014 and 2015 seasons.

These two teams started playing each other in 1896, making this rivalry one of the earliest football rivalries ever. They have also played each other every year since 1946, making this upcoming game the 66th consecutive meeting between the Utes and the Cougars. 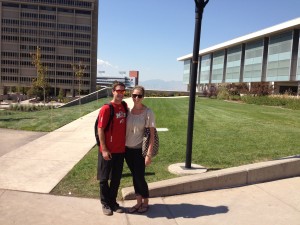 What do the Ute fans think of this rivalry?

“I grew up here, just a couple of blocks away, and so my whole family has gone to Utah,” Thomas Goates, a junior from Salt Lake City majoring in material science and engineering said. “We’re big Utah fans. Growing up, it’s always been a fun kind of rivalry. So keep that competition alive.”

Even those who aren’t quite as interested in the sports traditions of the two schools have something to say when it comes to ending the rivalry.

“It’s not the most important thing, but it definitely gets me going when I see a BYU team playing a Ute team,” Ian McMillan, a freshman considering a film major said. “I definitely want to see Utah win because they’re my school.”

For some fans, the desire to see their rivals fail is almost as important as seeing their team succeed. Such is sometimes the case with a true rivalry.

“I want them to lose every game,” Goates said. “I like BYU as a school, but when it came to BYU sports, I’ve always had this weird thing inside of me. I just wanted to see them fail.”

However, others feel they want an epic showdown between two undefeated teams going at it on the field, which increases the strength of schedule and the atmosphere of the game.

“It would be nice to see them win every game, because it’s a stronger opponent,” Rachel Broersma, a senior studying economics said. “And if we beat them, it’s better for us than to beat a team that’s been beaten by everybody else.”

Amid all the differing opinions and varying degrees of respect and indignation for the BYU Cougars, there is one opinion that has been universal: the rivalry game needs to continue.

“Yes, (the rivalry game) needs to continue for sure,” said Zach Millsap, a junior majoring in physics.

Millsap’s sentiment looks as if it’s shared throughout the Utah campus.

“It’s sad, this rivalry is one of the best in the nation,” Goates said. “It’s always a fun thing within the state of Utah. I think they need to play the game every year.”

It seems that even with the claustrophobic smothering of red throughout the campus up north, and the exclamations of the students that they bleed red, that some dose of Cougar Blue is necessary.

BYU women’s basketball managers help team on and off court