Film students, get your cameras rolling because the Utah Film Commission has just begun its 10th annual “Spot On” Commercial Contest.

The contest, open to any Utah resident or student attending a school in Utah, is hosted by the film commission as a creative way to market the state as a desirable place to film. The commission hopes to bring in more projects from outside clients.

What does the winner of the contest receive other than a great experience and 30 seconds of fame? How about tickets to the Sundance Film Festival and a cash prize? Last year’s first-place winner took home $3,000.

Marshall Moore, director of the Utah Film Commission, said that in 2003 a professionally made video of this caliber was out of the commission’s budget, so they started a contest and called it “Spot On.” 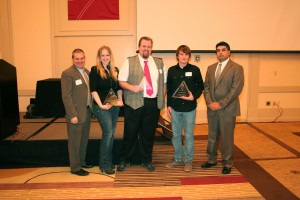 “It’s just kind of a catchy name,” Marshall said. “When you put a spotlight on something, you’re highlighting it, bringing attention to it.”

Moore also said the contest has been highly beneficial to the commission as it has loaned many creative ideas to their efforts from outside sources.

“We do this every day, but sometimes an idea comes to the surface that none of us ever thought of before.”

Advertising slogans used by the commission such as “Shoot here, love life” and “Utah is epic” have both come from the creativity of “Spot On” contestants.

Not only does the contest bring attention to Utah’s many filming assets, but it also brings attention to the work and genius of the contestants. Over the last 10 years, the winners have seen many more successes, including admission to prestigious film schools, a nomination for an MTV award and even directing big-name stars like Matt Damon, Sean Penn and Kevin Spacey.

Of course, all of those extra opportunities have come from a lot of hard work and a little passing of time.

“There’s no doubt about it—it’s a great way to get a foot in the door,” Moore said.

Last year’s first-place winner, Andrew Buys, continues to see success with his video “Utah Is Epic.” Ricardo Flores, the commission’s marketing and creative executive, said that Buys’ video was bought by the Utah Office of Tourism to be used as b-roll footage in a “Visit Utah” campaign. In the U.K., portions of the commercial were shown in over 600 theaters throughout the U.K. prior to “John Carter” being released there, to draw in more national visitors. Buys has won himself priceless exposure.

“We’re going to hear a lot more about Andrew in the next few years,” Flores said.

For film students like Colten Ashley, from Farmington, N.M., this year’s contest is up for grabs.

“It’s appealing because it’s an opportunity to get experience making media for a client,” Ashley said.

Ashley, who hopes to establish a Native American film institute to teach Native Americans how to express themselves through film and new media, feels that most students are apprehensive and intimidated to work on projects outside of school. This low-pressure style of contest is definitely a good opportunity to overcome that.

“It’s always something you can point to and say, ‘I have some skill making a product for a client.'”

The contest officially started Aug. 6; all submissions are due Nov. 30.