The men’s tennis team came out victorious in both singles and doubles during this weekend’s Utah Fall Classic tournament hosted here on BYU’s campus. 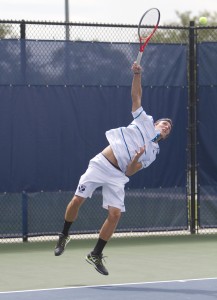 Not only did Kawka win the open singles, but he and teammate sophomore Keaton Cullimore won in doubles against University of Utah’s Hanza and Devin Lane.

“I’m always pleased when BYU teams win the singles and the doubles,” BYU coach Brad Pearce said. “That happened again this year so that makes me happy.”

The Utah Fall Classic is considered a pre-season tournament for the BYU tennis team and helps them get an idea of what is to come for the following season.

This tournament also gave Pearce a good idea of where his new players are and what it is they need to work on; he looks forward to seeing improvement and believes BYU will be a solid team come January.

The Utah Fall Classic makes way for not only a time of understanding skill competency, but it allows for an enjoyable atmosphere since it is a USTA sanctioned tournament allowing anyone who is an open player to compete.

“It’s really fun to have Utah’s team come up here,” Kawka said. “We have a tough rivalry, but we’re also good friends as well.”

Next up for men’s tennis is the ITA All-American from Oct. 1 through Oct.7.