Charlotte, N.C.—Exactly one week after Governor Mitt Romney formally accepted his presidential nomination from the Republican Party, President Barack Obama stood in front of Democratic party members in  Charlotte, N.C., to accept his party’s nomination for a second term. 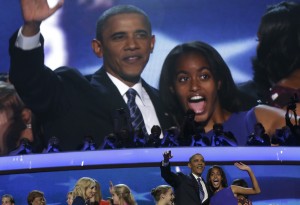 Biden, who preceded President Obama, described the nation’s slow ascension out of economic instability as “a journey.” This journey, Biden said, began four years ago, when “a battered nation turned away from the failed policies of the past and turned to a leader who they knew would lift our nation out of the crisis.” He also reminded them the journey was not yet finished, saying, “We know we still have more to do.”

Though a journey itself through a variety of issues ranging from the war in Afghanistan, the automobile industry, Medicare and tax cuts, Biden’s speech had two distinct purposes: to establish the character of Barack Obama and discredit that of Mitt Romney.

Biden reiterated insights shared two days prior by Michelle Obama concerning her husband’s character and values, but Biden focused primarily on Obama’s courage. Addressing the blue sea of Democratic party members in front of him, he said, “Ladies and gentlemen, I’m here to tell you what I think you already know. I watch it up close. Bravery resides in the heart of Barack Obama. And time and time again, I witnessed him summon it. This man has courage in his soul, compassion in his heart and a spine of steel.”

These comments marked an evident, emotional crescendo in Biden’s speech as his previously temperate comments quickly evolved into passionate rhetorical jabs at the Romney campaign.

Warning that Romney and Ryan would not be capable of making tough decisions, Biden asserted, “America is not in decline. American is not in decline. I’ve got news for Governor Romney and Congressman Ryan. Gentlemen: Never, never—it never makes sense, it’s never been a good bet to bet against the American people… Never.”

Following Biden’s speech, Obama took command of the pulpit to deliver his own. Cheers of “Four more years” rang out as he accepted the nomination and began his remarks.

“When all is said and done,” he said, “when you pick up that ballot to vote, you will face the clearest choice of any time in a generation. Over the next few years, big decisions will be made in Washington on jobs, the economy, taxes and deficits, energy, education, war and peace, decisions that will have a huge impact on our lives and our children’s lives for decades to come.”

“Ours is a fight,” Obama added, “to restore the values that built the largest middle class and the strongest economy the world has ever known.”

Obama also followed Biden’s example by disparaging the Romney campaign, saying early in his speech, “They want your vote, but they don’t want you to know their plan. And that’s because all they had to offer is the same prescription they’ve had for the last thirty years: Have a surplus? Try a tax cut. Deficit too high? Try another. Feel a cold coming on? Take two tax cuts, roll back some regulations, and call us in the morning.”

Biden’s and Obama’s speeches signaled the climactic end of a Democratic Convention that spanned from Monday morning to Thursday evening and included addresses from prominent political figures such as former president Bill Clinton, Nancy Pelosi and John Kerry.

At times the atmosphere in Times Warner Cable Arena transformed into one of a modern concert, with performances by artists Mary J. Blige, Marc Anthony, James Taylor and the Foo Fighters, and appearances by Eva Longoria and Scarlett Johansson.