The 23rd annual Timpanogos Storytelling Festival brought eight of this year’s storytellers to a kick-off event on August 30th at Mt. Timpanogos Park.

The Timpanogos Storytelling Festival started out in Karen Ashton’s backyard raising funds for the Orem Public Library for a children’s wing 32 years ago. Since then, it has become one of the community’s favorite events. In 2005, the festival moved to Mt. Timpanogos Park.  The festival runs from August 30 to September 1 and brings a total of one dozen storytellers, features a festival store and provides local food. The festival costs $8 per event except for the $10 event, Laughin’ Night, which Karen Acerson, from Lindon, said  is the most popular show. 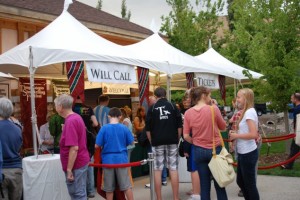 Acerson has been involved with the festival since it started. She started as a volunteer and is now the Director of the Festival.

“I love seeing the happiness on people’s faces,” Acerson said. “I love helping to bring a fun family event to our community. I love working with a great group of volunteers who have become dear friends.”

Acerson said the festival has been growing. More than 5,000 people came to the kick-off-event on August 30th.

Deborah Pilling’s roommate introduced her to the festival 13 years ago. They have been volunteering for the festival ever since.

“I wanted to do something in the community,” Pilling said. “The people that come are amazing and the storytellers are great to
Camille Jones, from Provo, came with her 7-year-old son, Josh. Josh met one of the storyteller’s at Canyon Crest Elementary and loved the story. She first came to the festival 11 years ago and has been wanting to bring her children back to listen to the storytellers.listen to. This makes it a great venue and opportunity.”

“I really like storytelling, and the kids love the stories,” Jones said.

Many people enjoy listening to the storytellers, even the fellow performers. Sam Payne is a performer who has been a songwriter for many years. He sings and tells a story with his original, jazz-inflected folk music at the festival.

“The Storytelling Festival is home to some of the greatest entertainers on the earth,” Payne said. “These people are people of such great craftsmanship that it’s just a pleasure, as an audience member to watch them, but also as a fellow craftsman, to watch, observe and learn. I think these people are incredible.”