When Ivy Chatwin, a junior majoring in conservation biology, first moved into her apartment, the gas was shut off. Having no stove, she turned to her camping equipment and cooked her food using a gas stove for the first week.

Chatwin was prepared for the unexpected.

“I worked as a park ranger where I lived 75 miles from the nearest town, so I had to be ready to sustain myself in any kind of situation,” Chatwin said.

However, other students do not have emergency supplies in their apartments. With the recent concern over Hurricane Issac, students have realized they are not prepared for an emergency.

Jessica Sutton, a sophomore studying English, planned on bringing a 72-hour kit to school but forgot it at home in the rush of packing. She said students do not  put much thought into emergency preparedness.

“I think it might be the last thing on their minds because we have so much school to worry about and then there’s also the social life of the apartment complex,” Sutton said. 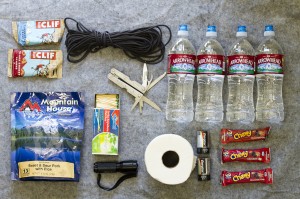 A list of items that could help students in emergency situations include:

Extra water – Water can be easily stored by filling up empty milk gallons. The Federal Emergency Management Agency suggests having one gallon of water per person for at least three days.

Toilet paper – Heidi Soderquist, a junior majoring in math, said she established her emergency supply of toilet paper after her roommates did not buy any.  Saving a few rolls of toilet paper in an emergency kit will not only help an individual be prepared for a major crisis but also for the times when roommates forget to pick up toilet paper.

Food – Sutton described that having non-perishables, such as canned goods, is easy.

“They’re non-expensive and you can buy them in bulk,” Sutton said.

It is important to make sure to have a manual can opener. Food in an emergency supply kit should be rotated out in order to prevent expiration.

Flashlight – The flashlight app on a cell phone might work for now but in an emergency it is important to have a flashlight and batteries and to know where the flashlight is located. Alaina Hirschi, a junior majoring in marketing, said that she keeps her flashlight on the counter.

“It’s kind of hard to miss, but if it moved, I would have no idea where it was,” she said.

While this list is not comprehensive, obtaining these five items will help students living in an apartment be more prepared for emergency situations.