A U.S. Supreme Court justice’s position change that  became “The switch in time that saved nine” in 1936 has interesting parallels to the recent Supreme Court health care vote and pries open what has been a mystery to scholars and historians.

“In a way I just got kind of lucky,” Carter said. “I didn’t start out looking for anything on this issue, but it turned out that way.” 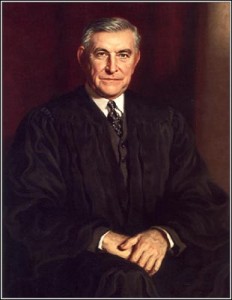 BYU Communications Department Chairman Ed Adams knew that Merlo J. Pusey, a Mormon and Pulitzer Prize-winning journalist, had donated many files to BYU before his death in 1985. Adams and Carter had for several years planned to look through the files, and Carter dove into the collection this spring.

New research hints at the thinking behind Supreme Court Justice Owen J. Robert’s 1936 vote that came to be known as “The switch in time that saved nine.”

“I knew that Merlo Pusey had written several books on the Supreme Court,” Adams said. “I thought there might be something of interest in his notes that may not have made it into his books. I just wasn’t sure what that might be.”

Adams’ suspicion was spot on. There are close to 90 boxes of Pusey’s notes and files, and Carter came upon something particularly intriguing in box 13.

“There was one notebook marked ‘confidential,’ and that’s where I immediately focused my attention,” Carter said.

The confidential file contained 23 pages of handwritten, unpublished notes from an exclusive interview Pusey had with then-recently-retired Supreme Court

According to Carter, it appears the interview concerned a biography Pusey was writing about former Supreme Court Chief Justice Charles Evans Hughes, with whom Roberts had worked.

Roberts gave insights about Hughes, recent Supreme Court cases and, most importantly, his reasoning behind what became known as “the switch in time that saved nine.”

“Once Roberts voted that way, FDR had no reason to pack the court,” Carter said. “There has been a lot of discussion why Roberts switched his vote. … (Pusey’s notes) are pretty significant because (Roberts) felt like he was criticized for his decision and didn’t really speak publicly about it. … Roberts burned his court notes and decided not to talk to people about it, but for whatever reason, he decided to go into it with Pusey.”

When Roberts did talk about his decision, he gave strictly legal reasons for the switch. Pusey’s notes, however, point to other issues.

“He does not say that the court fight had no affect [sic.] on thinking of justices,” Pusey’s notes say. “It is diff. to say what makes a judge decide as he does. Public outcry against an opinion is bound to have some effect on a man’s thinking when it is a question of degree — of how far we can go.”

Pusey’s notes suggest Roberts’ possible political and strategic motivations and that he may have been influenced by Hughes, as well as by public disdain for FDR’s court-packing scheme, to vote liberally.

“It is another piece of evidence that the justices do attempt to influence each other,” Richard Davis, a BYU political science professor, said. “In that sense, it provides more insight on how the justices interact with each other in order to shape judicial decision-making.”

According to Adams, the discovery is “just one more minor piece of evidence that helps to understand an obscure part of history.”

“(Each of the) two Roberts came up with answers opposite of what the other got,” Carter said. “You have the same two powers that came out with different answers on very similar issues. … I don’t think there’s any relation between the two (Supreme Court justices), but it’s pretty ironic.”

Carter and Adams detail the notes and their significance in the current issue of the legal journal, The Green Bag.

“We will be continuing to cull through Merlo Pusey’s papers,” Adams said. “Although he authored many books and worked as editorial page editor for many decades for the Washington Post, he is virtually unknown in journalism history.”