The BYU women’s volleyball team commenced their fall preparation in hopes of improving upon their 2011 season, their first in the West Coast Conference.

BYU is looking to improve in their inaugural WCC season, which saw them finish with a 10-6 conference record, landing them in third place in the conference standings. 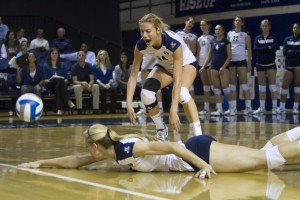 “This is always an exciting time of year for our team,” Head Coach Shawn Olmstead said. “I’m enjoying the work we have put into these practices and am enjoying even more the wonderful student-athletes we have in the

gym. They are working hard and making changes as we progress each day.”

The Cougar women’s volleyball team has much to be excited about. In the WCC preseason poll, they were picked to finish fourth behind third pick Pepperdine and first picks, Saint Mary’s and San Diego.

However, BYU hopes to perform better than the poll predicts. In 2011, they were picked to finish sixth and finished third. The Cougars have the personnel to improve with five starters returning and the addition of five freshmen to the roster for 2012—Amy Boswell (sister of junior Kimberli Boswell), Alexa Gray, Ciara Parker, Samantha Staker and Whitney Young.

One of BYU’s starters, junior Jennifer Hamson, was named to the 2012 Preseason All-WCC Team. Hamson is looking to improve her towering production. In the 2011 season, the 6-foot-7  opposite hitter was named All-WCC and Academic All-WCC and led the conference with 3.94 kills per set. She also was No. 22 in the nation for points per set at 4.88. Hamson also plays on the Cougar women’s basketball team.

BYU will need increased production in order to finish higher than predicted. During the 2011 season, BYU lost five of six matches in conference play against Saint Mary’s, San Diego, and Pepperdine, the top three teams in the 2012 preseason poll. The lone win came against Saint Mary’s.

The Cougars open their season with back-to-back tournaments on the road, the first at Rice University starting on Friday, August 24 and the second at Wichita State. In Houston, BYU will also compete against Arkansas State in the season opener and former Mountain West opponent Air Force before facing host Rice.

BYU’s first home game will be on Friday, September 7, against the University of Utah at 7 p.m. To see the women’s volleyball schedule, visit their website.